Remibar is a project that aims to increase continuity in five major water systems in Norrbotten and Västerbotten. To improve connectivity over 300 migration barriers will be removed which benefits aquatic species.

The project began in September 2011 and will be running for five years. It represents the largest freshwater project initiative in Sweden and also one of the largest LIFE projects within the EU. The work is conducted within the network of Natura 2000, and the goal is to improve the conditions for the target species salmon, freshwater pearl mussel, bullhead and otter, along with their habitats.

A total of 300 migratory barriers will be addressed. The project has a budget of approximately eight million euro and the EU Commission supports the project with more than four million euro.

The water systems that are targeted by the project are

Within the project, various information and education initiatives are being implemented to increase the awareness of migration barriers in stream crossings. This includes training and seminars aimed at contractors, road managers, landowners and authorities.

The project will also create demonstration sites in both Norrbotten and Västerbotten in order to demonstrate how to build functional stream crossings.

The projects within Life+ Nature and Biodiversity help to improve the conservation status of endangered species and habitats. 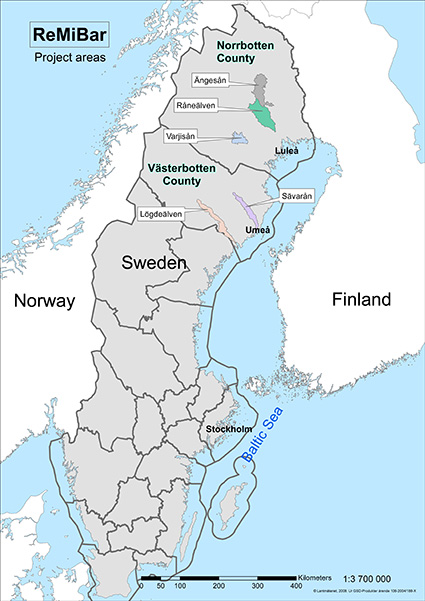 Project areas: Click on the image to see a larger view.