We are building a 20 km long new four lane motorway south of Stockholm with a separate bicycle route and pedestrian path along the entire stretch. The Södertörn Crosslink will contribute to increased safety and smoother transport options.

Why we are planning for a new route

The current road 259 on Södertörn in southern Stockholm is one of the region’s most accident-prone sections. Therefore, the Swedish Transport Administration has been commissioned to build a new, safer road in the area – The Södertörn Crosslink Project.

This is the Södertörn Crosslink Project

The Södertörn Crosslink Project is a new route in southern Stockholm. The road, which will be approximately twenty km long, stretches from E4/E20 at Vårby backe in the vicinity of Kungens kurva to road 73 at the Jordbro motorway junction in the municipality of Haninge. The project also includes a bicycle route/pedestrian path running alongside the road.

The Swedish Transport Administration is also planning reconstruction of the Vårby Bridge (E4/E20) spanning over Fittjaviken, since the present solution will not be sufficient when the new Södertörn link road and the Stockholm Bypass come together in the area.

Building roads through a densely built-up area of high environmental value along the route entails a lot of planning and carefully weighing up of the pros and cons before making the final decision. One must show consideration for people, wildlife and nature. For this reason several segments of the road will go through tunnels. A total number of three tunnels of approximately 5 km will be built.

In several places along the route the Swedish Transport Administration plans to build underpass tunnels and overpasses so that both people and animals can move around freely in the area.

The Södertörn Crosslink Project, together with the Stockholm Bypass and the Norrort Route will make an outer ring road, connecting together the southern and the northern parts of the county of Stockholm. This will provide new possibilities for housing, commuting, the labour market as well as commerce and industry for the whole region.

What: The Södertörn Crosslink Project is a new road connection between E4/E20 at Skärholmen/Kungens kurva and road 73 in Haninge. The road will measure approximately 20 km, of which 5 km will consist of tunnels.

Why: New traffic solutions are necessary in order to improve road safety, accessibility and efficiency of traffic flow at Södertörn.

Current situation: We are currently making plans for the new road. Estimated time for the beginning of the road construction is between 2023 and 2024. The estimated construction time is approximately ten years. 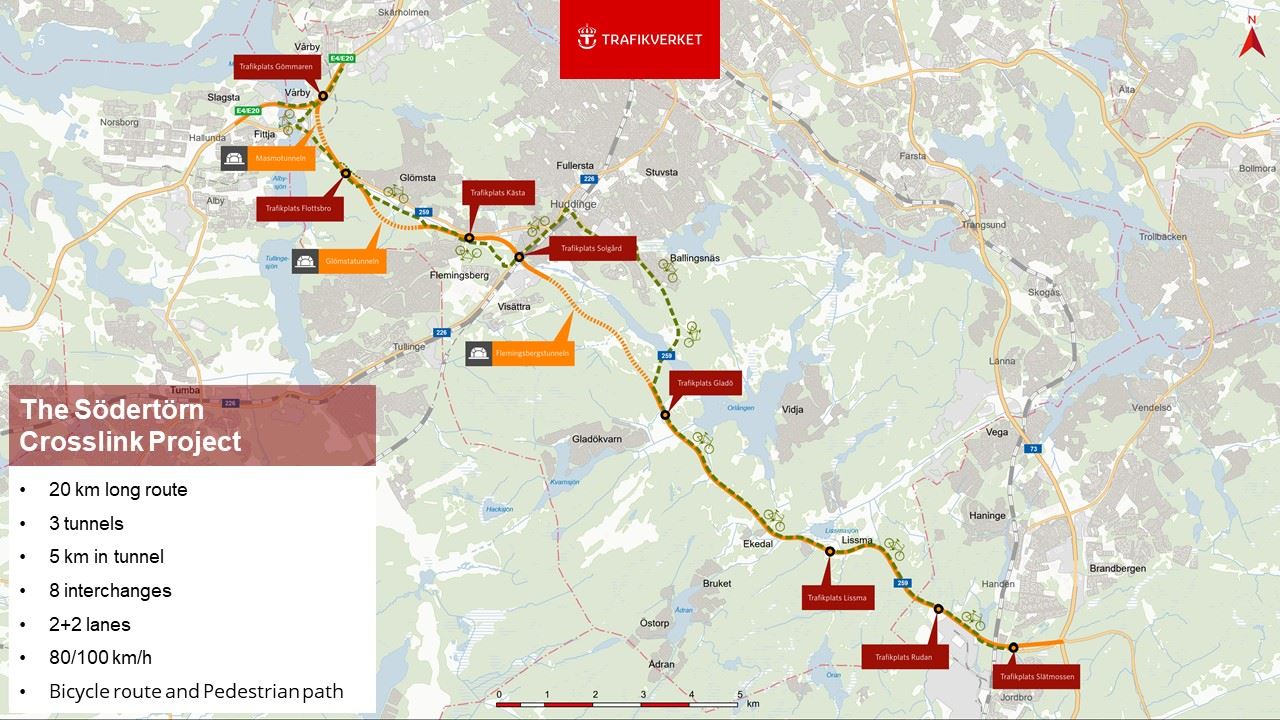