We are: rebuilding three interchanges at Lundbyleden, rebuilding and adapting streets at Backaplan to improve traffic flow and further urban development, and expanding Bohusbanan to a double track railway and building a commuter train station at Brunnsbo.

As one of Gothenburg’s most important and trafficked routes, Lundbyleden is part of the national trunk road network and is therefore of national interest. It links together european routes E6, E20 and E45 with road 155 to amongst others the Port och Gothenburg, residential  areas and industrial areas in Torslanda and on Öckerö. Lundbyleden is periodically very trafficked today and is percieved to be very difficult to orient.

The opening of the Marieholm tunnel presumes an adaptation of Lundbyleden, specifically the part of Brantingsmotet–​Ringömotet, for extended capacity and improved orientability.

In cooperation with the City of Gothenburg, we are rebuilding certain streets at Backaplan, to improve traffic flow and enable urban development in the area which increases traffic safety and the connection to the local road network. We adapt Lundbyleden to the ongoing densification with housing, retail and other businesses along Norra Älvstranden and Backaplan plus other infrastructure projects.

We are expanding Bohusbanan to a double track railway past Brunnsbo to decrease the sensitivity to interference on both Hamnbanan and Bohusbanan. We are building a commuter train station which means new traffic opportunities for local traffic and enables a good connection to commuter traffic on Hisingen.

Lundbyleden in a greater context

The rebuilding of Lundbyleden is a part of the West Sweden package (Västsvenska paketet). The West Sweden package contains investments in roads and railways approximately up to 2028 for trains, buses, trams, bicycles and cars. These investments contribute to developing the Western part of Sweden in a sustainable way. It will be easier to get around, public transport will become more attractive and it creates extended commuter opportunities for anyone who wants to live, work or study in different locations in the west of Sweden.

Overview over the components of the project 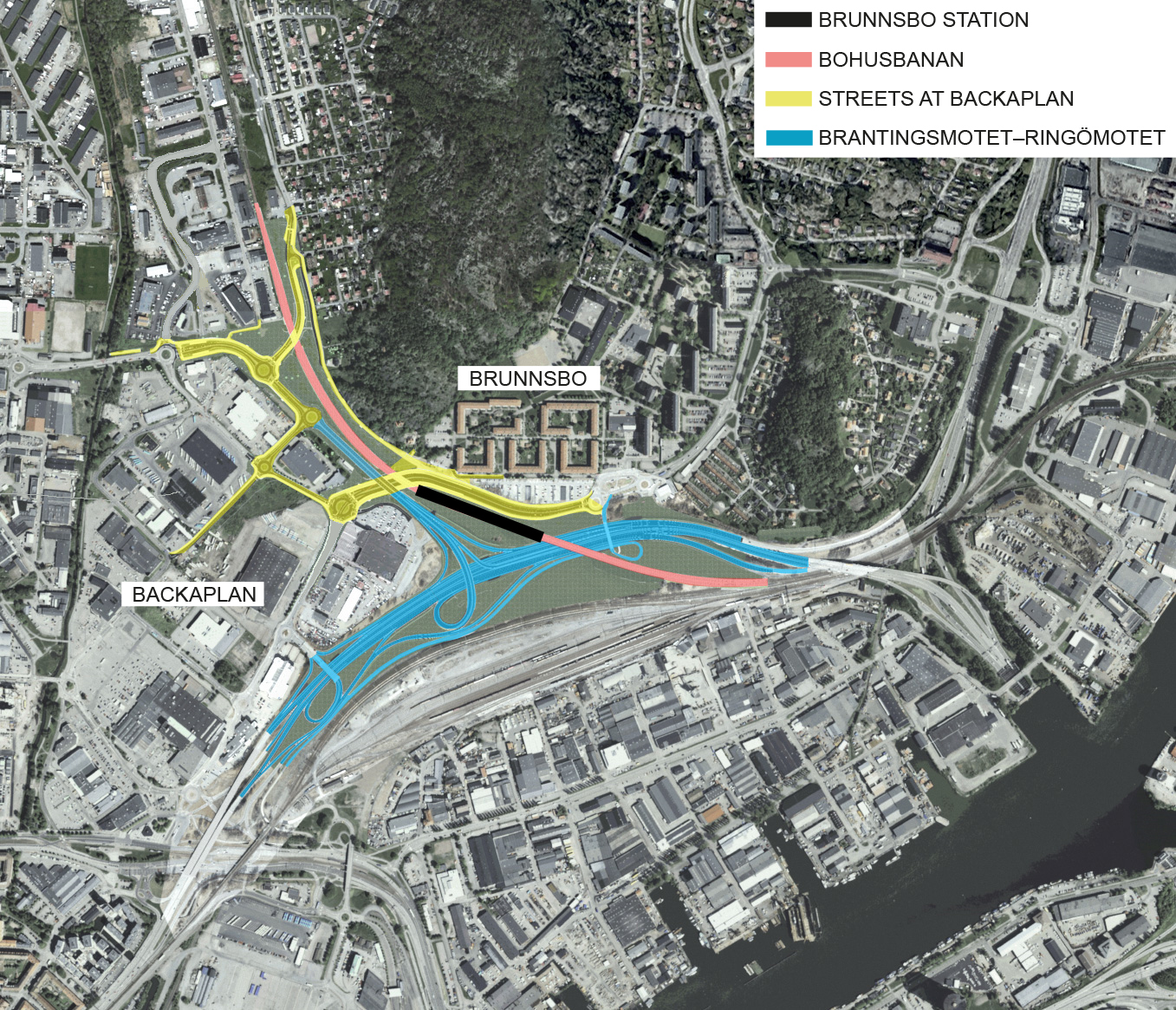 What: We are adapting Lundbyleden (E6.21) to the ongoing densification of housing, retail and other businesses along Norra Älvstranden and Backaplan and to other infrastructure projects.
In cooperation with the City of Gothenburg we are rebuilding certain streets at Backaplan.
We are expanding Bohusbanan to a doulbe track railway and building a commuter train station in Brunnsbo.

Why: For increased traffic safety, accessibility and to make it easier to orient yourself between the interchanges exits and entrances, we are rebuilding Lundbyleden between Brantingsmotet and Ringömotet.
To enable urban development in the area we are creating an improved connection to the local road network and improve the traffic flow and raise traffic safety through level crossings.
To decrease the sensitivity to interference on Bohusbanan and Hamnbanan, we are extending Bohusbanan to a double track railway. With a commuter train station at Brunnsbo, we are creating new traffic opportunities for local traffic and make it easier to commute to other parts of Hisingen and other parts of Gothenburg.