The West Link is a major transport infrastructure project in Gothenburg, West Sweden.

The West Link is a railway connection in a tunnel under the center of Gothenburg. The tunnel will connect commuter rail services to routes that pass through the city, and give rise to three new stations in Gothenburg. The new railway tunnel will facilitate travelling. Train frequency can be increased, travel times made shorter and passengers can reach more destinations without transfers.

As commuting times are reduced, the labor market will expand – for the inhabitants of both Gothenburg and Western Sweden. An important prerequisite for regional growth and a sustainable urban and regional development.

The West Link Project is included in the national plan for the Swedish Transport System 2014–2025, which the Government adopted in 2014. The West Link is also part of the West Swedish agreement which includes investments in public transport, rail and road. 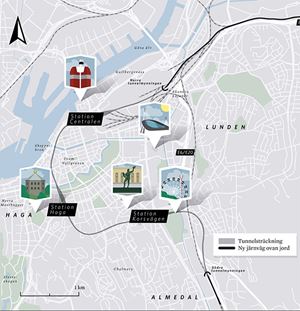 A tunnel with three underground stations

The West Link is an eight kilometer long double track railway, including a six kilometer railway tunnel, underneath the city of Gothenburg.

The West Link will increase accessibility to Gothenburg with three new underground stations in the city; at Gothenburg Central Station, Haga and Korsvägen. At the same time, the capacity for rail traffic will increase with routes going through the city.

The West Link will run from Gothenburg Central Station along Södra Älvstranden and pass the two stations at Haga and Korsvägen, which will enable easier access to a number of important places and institutions.

Gothenburg´s central station is the hub of Western Sweden´s railway system. With today´s level of traffic, it is being used to its maximum.

The west of Sweden is growing, both in regard to population and economic growth. Rail investments is an important ingredient to reach the goals of increased regional growth, since it makes more people able to reach a bigger number of working places within reasonable commuting time. A reinforced railway system can sustainably contribute to regional expansion.

The Swedish Transport Administration has begun the work of reinforcing the railway system in Western Sweden, where Gothenburg Central is the hub. The capacity issue in and around Gothenburg has grown and the capacity is already maximally used with today's railway traffic.

A solution is needed to get a safer, more flexible and reliable railway traffic in Gothenburg and Western Sweden. It is also necessary to get the intended effect for other planned activities in the Swedish railway system, to relieve the public transport in Gothenburg, and to develop the city.

Gothenburg is the second largest city in Sweden, located on the west coast with a population of almost half a million. Seventy per cent of Scandinavia's total industrial capacity is located within a 500-kilometer radius of the Gothenburg Region. The Port of Gothenburg is the largest port in Scandinavia, visited by more than 11,000 ships each year. Gothenburg is one of the fastest growing regions in Northern Europe.

What: A railway tunnel under the centre of Gothenburg. Three new underground stations in the city, at Haga, Korsvägen, and at Gothenburg Central Station.

Why: Facilitates travel in Gothenburg and Western Sweden. Provides increased capacity for commuter rail services and increased accessibility to the city. Frees up space at Gothenburg Central Station and reduces vulnerability in the rail system.

Current status: Work for the Railroad Plan started in 2011.

Cost: Estimated at SEK 20 billion at 2009's prices. Västlänken is part of the West Swedish Package.

Information is subject to change. 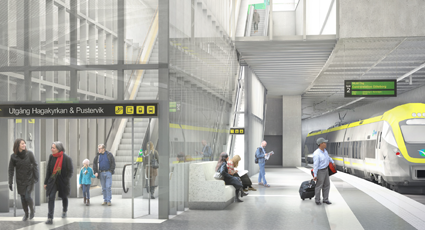 Information about the West Link, a railway tunnel underneath central Gothenburg which will provide three new stations and connect commuter traffic with transit traffic.