The Gothenburg Port Line is currently a single-track railway line. In order to meet the demands of growing transport needs, the Port Line needs to be expanded to a double-track line.

The Gothenburg Port Line is one of Sweden's most important railway links. The track makes it possible for freight traffic from across the Nordic region to reach the harbour districts in Gothenburg. The almost 10 km line is today a single-track line with too low of a standard to meet future traffic needs. An expansion of the Port Line to double-track is required in order to increase both the amount of rail traffic and the total amount of freight traffic.

The Gothenburg Port Line is a goods-only railway. It runs through southern Hisingen, occasionally through heavily developed areas, such as residences, schools, and nature areas. After passing under the Älvsborg bridge, the track heads west through an industrial area with oil refineries and depots. Different types of goods – including hazardous materials – are transported along the track to vessels in Gothenburg Harbour and the surrounding industries. The Gothenburg Port Line is funded and operated by the Swedish Transport Administration.

The future of the harbour is on land

Gothenburg Harbour is the Nordic region's largest harbour and a natural centre for freight traffic in Scandinavia. 60% of Sweden's container traffic and 35% of the country's foreign trade goes through here. The mode of transport that is most efficient from an environmental and an economic perspective is a combination of shipping and rail. Heavy rail traffic between the harbour and various locations in Sweden make it possible for businesses around the country to have quick, cost effective and environmentally smart connections with the Nordic region's largest harbour.

The Gothenburg Port Line Project consists of several sections that will be carried out during different periods of time. In the next paragraph you can read more about each section:

Construction of a new track parallel to the existing track will be carried out on the stretch between Pölsebo and Skandiahamnen. The stretch runs through a major industrial area with oil refineries and petroleum industries. There are several factors to take into consideration during construction, for example rock shelters, gas pipelines and other environmental zones.

A new double track railway tunnel is to be constructed under the Eriksberg district. The new double track will branch off from the current single track immediately after the Eriksberg junction. After that, the tracks enter an approximately 1.2 km long tunnel. The tunnel will go through Bratterås, under and through Krokäng, and exits into the Pölsebo railway yard, where the double track connects to the current altitude and the expansion westward. The connection will be located somewhere on the stretch between the tunnel entrance and the Älvsborg Bridge, depending on the elevation of the track. After that the track splits into the Rya Line, the Skarvik Line, and the Höke railway yard as well as continuing westward.

At the section where a football field is located today, the roof of the tunnel may be a few metres over the current ground level. The football field will be reinstated in almost the same position as today. The old track between Nordviksgatan and Londongatan will be demolished and the ground will be modified and restored to the surrounding area.

The area surrounding the planned tunnel is characterised by urban centres with houses, apartments, schools and nature areas. During construction of the new tunnel, careful consideration will be taken with regards to the nature areas in the district and measures will be undertaken to reduce noise and vibrations. Restoring both park and local environments after the tunnel work is completed, will be an important process. Rail traffic will run as usual while the tunnel work is in progress.

The railway yard was rebuilt in 2015-2016 in order to make more simultaneous train movements and future higher speeds possible. In the new yard it will be possible for an increase in the traffic load on existing tracks and the yard is now adapted to supplement the new bridge over Göta älv, the Marieholms Bridge. We have replaced approximately 25 switches in the eastern and western switch zones and adjusted the connections to existing tracks.

What: The Gothenburg Port Line - the rail link between the Port of Gothenburg and the rest of Sweden - needs to be expanded to a double-track line in order to meet the demand for future capacity needs and safety standards.
Why: The expansion of the rail road is an important step in order to meet future demands for increased capacity. This improvement will contribute to transferring freight transports from road to rail which will improve and contribute to sustainable and safe transportation of goods. The fact that the railway section between Eriksberg and Pölsebo is built in a tunnel will also contribute to and make urban development possible in the area.

To come: - Production of section Eriksberg-Pölsebo: 2019-2023.
The Swedish Transport Administration invites potential tenderers to discuss the up-coming contract Eriksberg – Pölsebo. The purpose is to gain further knowledge about procurement and contracts from the constructors point of view. Please read the information "upcoming contract".

Welcome to contact us if you are a potential tenderer: Katarina Kristiansson, Public Procurement Officer.
Phone: +46 10-1232271. Katarina.Kristiansson@trafikverket.se 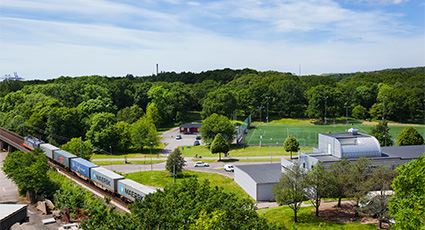 Read about the project in swedish