Gå till sidans huvudinnehåll
This news is older than 6 months

On June 22, the test stretch of the electric road will be inaugurated on the E16 in Sandviken. With that, Sweden will become one of the first countries in the world to conduct tests with electric power for heavy transports on public roads. 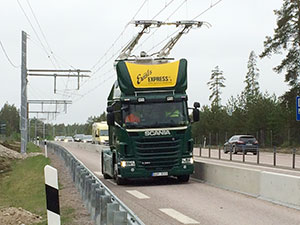 The first electric road in Sweden will be inaugurated on the E16 in Sandviken. Photo: Region Gävleborg (Click for larger image)

– Electric roads will bring us one step closer to fossil fuel-free transports, and has the potential to achieve zero carbon dioxide emissions. This is one way of developing environmentally smart transports in the existing road network. It could be a good supplement to today's road and rail network, says Lena Erixon, Director General of Trafikverket.

The technologies for electric roads have developed rapidly over the last few years, and are now mature enough that some of them can be tested. Last year, the Swedish Transport Administration, in consultation with Vinnova and the Swedish Energy Agency, decided to give support to two test facilities. The two systems differ, above all, as to how electric power is transferred to the heavy vehicles. The test on the E16 in Sandviken is being carried out by Region Gävleborg, and involves a current collector on the roof of the truck cab feeding the current down to a hybrid electric motor in the truck. Outside Arlanda, the eRoadArlanda consortium company will test a technology that involves an electric rail in the roadway charging the vehicle during its trip. For the time being, the work will take place on a closed-off road, but the plan is that the technology will be demonstrated in actual traffic next year.

- Electric roads are one more piece of the puzzle in the transport system of the future, especially for making the heavy transport section fossil fuel-free over the long term. This project also shows the importance of all the actors in the field cooperating, says Erik Brandsma, Director-General of the Swedish Energy Agency.

The tests will continue up through 2018. They will provide knowledge of how electric roads work in practice, and whether the technology can be used in the future. The experiment is based on the Government's goal of energy efficiency and a fossil fuel-free vehicle fleet by 2030, and will contribute to strengthening Sweden's competitiveness.

- Electric roads could have great significance for creating more sustainable transports in the future, and can simultaneously contribute to strengthening Sweden's competitiveness. This is also a good example of how government agencies can use procurement to stimulate new solutions, says Charlotte Brogren, Director-General of Vinnova.

The three government agencies are partially funding the project, and the participants are paying for the rest of the funding.

Swedish Transport Administration: Responsible for roads and railways in Sweden.

Swedish Energy Agency: Works for the use of renewable energy.

The test stretch on the E16 is two kilometers long. The technology is similar to light rail, with contact lines 5.4 meters over the roadway. The truck has a current conductor on the roof that feeds 750 volts DC to the truck's hybrid electric system. The current conductor can connect automatically at speeds up to 90 km/h. The test stretch is equipped with posts 60 meters apart that hold up the electric lines over one of the lanes. At a rest area, there is a transformer for low-voltage direct current of the same type as in the light rail network. Other traffic on the road will not be affected.

For more information on the electric road project: www.trafikverket.se/elvagar